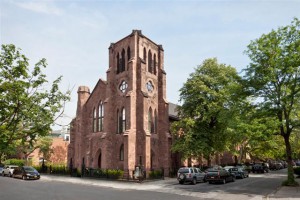 Baxt Ingui Architects, P.C. received the 2012 Design Award of Merit from the American Institute of Architects, Brooklyn in the residential Architecture category.

The gothic revival style Church, originally designed by Minard Lafever in 1851-52, was partially abandoned for several years in the early 2000’s and was used to a limited extent as a day care facility. The building was in horrible disrepair with roof leaks, slowly destroying the decorative plaster in the interior space. We were able to salvage some window stained glass, decorative wood work from the alter, the bell inside the bell tower and lighting fixtures that were later restored and re-installed inside and outside the building as a featured architectural element.

The brownstone façade was carefully restored by Burda Construction in a way that retained as many of the original brownstone features as possible. The project was completed in 2011 and all 23 condominium apartments were sold.

We have since collaborated with three Owners to further modify and customize their apartments.

For further reading and viewing, see these links: